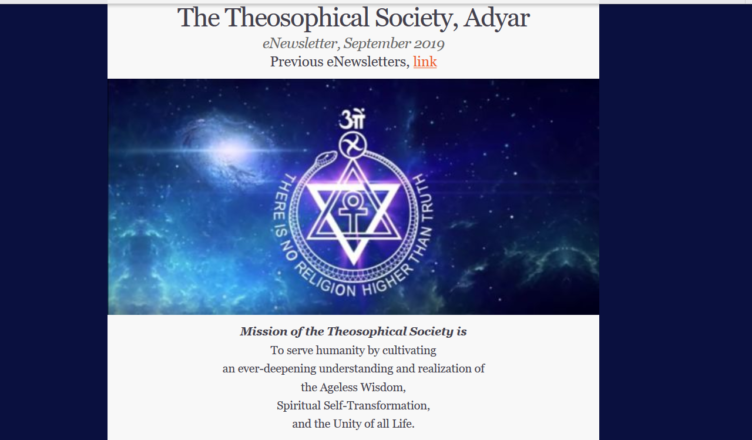 June-July General Council meeting at the International Theosophical Centre (ITC) in Naarden, the Netherlands. It includes Damon Scothern’s video of the meeting. View by clicking the picture or here. All the President’s videoblogs are here.

You are the World

Prior to the International Convention. Venue: The Krishnamurti Study and Retreat Centre at Rajghat, Varanasi. The lush green, serene campus is situated at the confluence of rivers Ganga and Varuna. Accommodation in rooms and cottages at the campus. Registrations will be done on «first come, first served» basis as the number of participants is limited. Online registration and other details,
click here

Preceeding the International Convention, on both December 29 and 30, identical full-day excursions to sacred places at and near Varanasi are arranged. You can register for either one of those two days. The fee of Rs.2,500 does not include food during the excursion (it can be a la cart) and is not included in the Convention package. Payments to be made not later than December 1, due to the arrangements that need to be made. The excursions start and end at the Indian Headquarters.

31 December, 2019 – 5 January, 2020
Where is the Indian Section TS? look here, google map
Information for registrations, pdf
REGISTRATION FORM, pdf
The International Convention is hosted by the Indian Section and will be held at the Section’s Headquarters at Kamachha, Varanasi.

Last winter the International Youth Convention was held at Adyar with good participation. The focus was on group discussions and practices. This will also be the case for the upcoming Youth Convention.

Link to this Youth Convention at Adyar.

The Headquarters of the Indian Section welcomes delegates

The preparations, which are going on at Kamachha, Varanasi, are led by Pradeep Gohil, the President of the Indian Section and Shikhar Agnihotri, the Convention Officer. On the photos the organizing team, the Headquarters building, and a room with two beds at the new Hostel.

November 18 – 29, ADYAR, India
School of the Wisdom
Self-Awareness and Awarerness, by Dr Jose Foglia from Uruguay

December 3 – 15, ADYAR, India
School of the Wisdom
Discoverin Dialogue – In Freedom From the Known, by Paul Smith from England

December 29 or 30, 2019, Varanasi, India
Tour at Varanasi for delegates, registration required in advance by 1 December.